Halfway through our 12 week challenge! It has been quite a lot harder this week as I still have this nasty flu/cough and haven't really had the energy to do anything!
I have been meaning to try a few new recipes (but don't really feel game for the inevitable FAIL before the try again & hopeful win!) & also to make our own hummus, mayo & ketchup supplies but to no avail.  I have also found it hard to carry on the walking - so am taking a break - hopefully better soon!

Though, I have been looking & researching were to source/buy cheaper & bulk amounts of tapioca flour, almond flour & also brown rice flour, as I want to start using that in Phase 3.  I am interested in trying out a sourdough bread & pasta.  At the moment Bin Inn plus a few traders on trademe have the cheapest prices - some as cheap as $4-5 a kilo.  Just need to source it without the transport cost!

RECIPE WIN
1.  Banana Bread - I thought I would give this a go & it was really nice.  I especially liked it when it had cooled down & I could slather it in butter.  I also substituted the shortening in the recipe for butter.

I wasn't even sure if I would make it this far - but we have & I am amazed - but also more determined to keep going! I have now lost between 6-7kg & that helps to spur me on.  I also feel better (although I have just been sick!) in that I am not so tired & I also think my teeth are whiter! Random - but I suppose that has to do with the sugar (or lack of it).

1.Pizza - made with almond & tapioca flour.  I mostly liked this, but Jon liked it ALOT - it was gone in 5 mins.


Not much else happened this week, except I made up a list of 7 meals that I am happy with during the week - I would like to extend this to about 10-12 as then I don't get too sick of the same thing each week.  I would like to get it so that these are my easy "go to" meals.

Wow - Phase 1 done & dusted! It went fast  The first 10 days were definitely the hardest & now it seems we are in the swing of things.  Potato eating on the weekend wasn't that exciting! We were at a conference for the weekend, so I think we managed pretty well with very minimal (unavoidable) cheating.

I have lost about 1kg this week, and now its about a total of 6kg or more that I have lost from the beginning of this diet! YAY

I have not done much experimenting in the kitchen this week - I have either been away or very busy.
Just a pointer before I go onto the recipes - I have realised that making my own stuff means that it doesn't last as long - either it gets devoured - or it goes off a lot quicker than store bought.  I unfortunately had to throw out my tomato sauce as it was becoming tomato wine! Next time I will make a smaller batch!

RECIPE OK
1.  Meatballs - made with mince, egg & a bit of almond flour.  I also added some flavours/spices.  I'm just not sure if I liked both the texture & the taste.  I think if I had eaten them hot with nice sauce, then that would have enhanced the experience.


RECIPE WIN
1.  Stuffed butternuts & zucchini.  This was a recipe I adapted/made up.  I made a mince/spag bol mix up with tin tomatoes & grated carrot etc.  I then hollowed out both zucchinis & butternuts & put the mince mix into these, sprinkled with chees & then baked.  These were awesome & had some leftover for lunches the next day.
2.   Broccoli & chicken bake/casserole  - this was really yummy & very easy to make.  I used fresh chicken breasts, no mushrooms & I couldn't get stock without sugar in it, so just used water.  It was nice :-)
Sorry - no pics this week!

RECIPES to TRY this week (that I didn't get to last week - AGAIN!)
1.  Coconut yoghurt
2.  Israeli Salad
3.  Scotch Eggs - will have to substitute pork mince for ??
4.  Sausage patties for breakfast
5.  Naan bread
6.  Choc slice 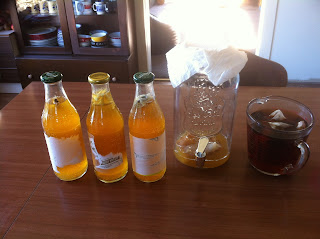