On Sunday this last week it was 2 weeks since they collected my eggs & theoretically the first time they could find out if I was pregnant.  The blood test people here in Kaitaia don't open on a Sunday, so I had to wait until Monday.  I had it done about 8:30am and then had to wait all day for the phone call.
It eventually came about 3pm, and the news was that it was a positive test!  Wasn't really too sure how to react & ended up having a little cry!  I will need another test on Friday to confirm & also monitor my hormone levels.  I am thinking I might do a home pregnancy test then too, just so I can take a picture of the stick... :-)
We celebrated the news on Monday night with Jon mopping the basement floor from all the rain water that had flooded in there & me going to bed very early with a crazy migraine -- without taking any panadol!!
If all goes to plan, the baby will be due early December -- I am thinking the day the world is suppose to end would be good -- 12/12/12
O well, one more step along the journey...God is good :-)

So 14 eggs collected, 10 were injected & 8 fertilised.  We waited until day 3 when there was a 8 celled egg that they were happy with to put back in.  This is the picture of it here, magnified a qwibillion times.  I think it is really less than the size of a pin-head! 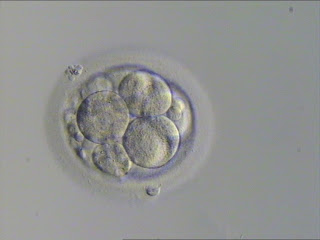 They put it back in -- much like a smear test, no big deal really.  I could see it all on the ultrasound it was quite fascinating.
The rest of the eggs they cultured on until day 5 when they froze 1, and then waited one more day to see if they could do anymore, which they could and they froze 1 more.
So in total we have 2 in the freezer & 1 implanted into my body :-)
Now it is just the waiting game -- I will take a blood test next Monday to find out whether I am pregnant or not.
I am back at work, feeling like normal (no more pain or bloating from the hormonal drugs & 14 eggs in my ovaries!).  I do have to insert progesterone drugs inside me 3 times a day which is kinda not all that nice, but don't seem to have any side-effects from that.
All in all it has gone rather smoothly & we have a lot to be thankful for.

2 weeks ago we got the call from the clinic to start the daily injections.  Since Jon has been doing training at St Johns it was going to be his job to jab me.  I wasn't really looking forward to it in case of side affects etc.  The first jab freaked me out a bit & I found myself sitting in a chair with the world spinning & feeling like I was going to spew.  The little "anxiety" attack passed pretty quickly & the rest of the injections were really no problem.  I did end up with a few bruises on my stomach & it wasn't all that nice, but my body responded well & almost felt like really enjoyed the hormones!

After a week of injections we travelled down to Auckland for our first scan. They found about 13 follicles the biggest being 16mm.  Two days later we had another scan & this time measured 12 follicles the biggest being 26mm.  By this stage I was feeling rather uncomfortable & bloated which is understandably because each month you normally develop 1 follicle which might get to 28mm on its own, yet I had another 11 or so in there too!

Last Friday night (2nd Mar) they instructed us to have the trigger injection which makes my body ovulate within 40 hours.  Therefore my scheduled egg collection was 36 hours after the injection before it would want to ovulate.

Here is Jon's viewpoint on the next bit of the process...

On Sunday Ruth had a mini-operation which went well but it wasn't all that easy for her. As they were putting her under the anaesthetic she freaked with the nasal oxygen and asked to sit up at which point she thought he couldn't go through with it. She steadied herself and prayed and after a short 10 minute intermission the procedure began. There were 2 female nurses - one for comfort, one as a doctor's assistant and then there was the male doctor who was collecting the eggs and the scientist (female) who was in charge off looking for eggs in the fluid. The doctor used a 12 inch needle to poke into each ovary under the aide of ultrasound to guide his way. I was in the room watching the procedure on screen and listening as the scientist kept us in the count of how many eggs were being found 4...8...14. There were a total of 14 retrieved and as Ruth was recovering I had to go and provide my part of the equation and so those have been combined in a process called ICSI (more accurate than conventional IVF) and we are waiting to hear back how many were successful. Apparently, not all the eggs are appropriate for fertilization as some of them are immature. Then after fertilization there is usually an 80% success rate of embryos produced.

The replacement procedure, of which they allow us to put back only one as we are young, is to happen on Friday all going to plan.

All of this has made us very thankful that we are back in NZ and not trying to attempt this procedure in Ukraine. The added pressure of not understanding would have clinched it for Ruth I reckon and the fact that at every step of the way it is all about the money and you providing your own equipment. And then not being sure if they are telling you the truth and asking for bribes...That is just a randomness that you don't need when you are getting into something as private and intimate as this.

We have just had a phone call from the clinic to say that of the 14 eggs collected, 10 were mature enough to use & of those 10, 8 have fertilised effectively.  WOW -- that''s a big tribe :-)
More updates to come I assume, but it has been extremely humbling to have people all over NZ & the world praying & caring for us.  God has given us a huge peace about this & although hasn't been easy, we keep on trusting Him.  He is a good God & we rely on that fact.