It was good to be home.  We had lots of visitors, recovered pretty well from the ordeal in hospital.  Still had numbness around my hips.  It was a great time just hanging out with baby & Jon was home a lot from work too. 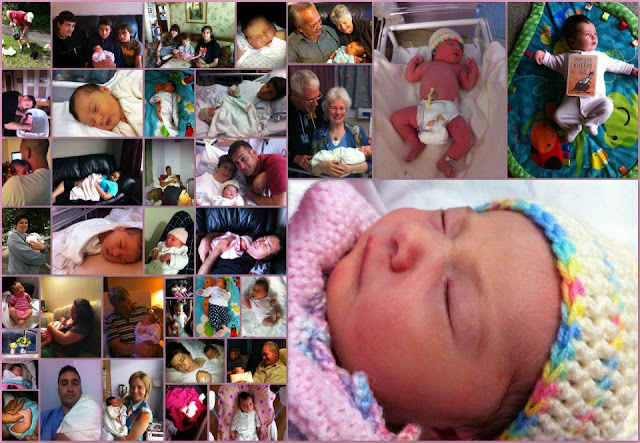 Once reunited with Jay & meeting baby for the first time the feelings were unbelievable!  The drugs were still wearing off -- or should I say still kicking in and things seemed all very strange & surreal.  It was amazing to hold Gabriella for the first time & the disconnect between the labour & her birth in my brain was kinda weird.  Even now it is hard to relate the two things.  Jon had waited for me to weigh her & do the other kinda measurements -- he too was exhausted!
She weighed in at 7 pounds 11 & was 51 cm tall, she was absolutely beautiful!
My parents turned up not long after that & so did my sister.  We also had other visitors in the next few days.
I wasn't feeling too bad, although the drugs were masking my pain.  Everything seemed to be in healing process and it looked as if I would stay in hospital a day or so (it was Wed morn she was born) and that we could most likely transfer back to Kaitaia hospital on Thurs or Friday.  On Thursday morning my midwife was wanting to get me up & showered so I could get my catheter out & ready to move on out.  As I went to sit up, the whole world started spinning -- a shower was looking out of the question.  My head started to pound & we realised that all was not well.  Jon instead gave me a sponge bath (poor boy!) and the doctors came to assess me.  They reported that while the anesthetist was trying to get the spinal block in that he withdrew some blood on one of the attempts & realsied that my spinal fluid area had been pierced (whether then, or previously we don't know) and that with this tiny hole my pressure was all upset & that I was experiencing "spinal headaches"!  The only cure for it was another procedure or to wait it out lying flat on my back.  Drinking lots of caffeine would also help.  So we opted for buying a big bottle of coke (I hadn't drunk it for about 2 years & didn't say I enjoyed it!) and me lying flat on my back.  Feeding baby was proving difficult from this position, but she was a very good sleeper & the midwives & lactation consultants were very helpful.  At 7pm each night though they would go home & we would have a nurse come on shift, some of these were great -- others were not that helpful.  I found the nights very frightening & didn't sleep much at all.
Thursday night Jon had to leave to go back to Kaitaia & we had arranged for his sister (Geordie) to come down to be with me.  We were hoping that maybe she would be able to drive me back to Kaitaia on Friday.  But on Friday morn we attempted the shower again -- this time I pushed through & enjoyed the shower until near the end when I nearly fainted & the midwife had to help me.  I realised that the headaches were getting worse & I wouldn't be going home! :-(
The anesthetist came back to explain to me the procedure they could do which was called a spinal block.  They would insert a needle again into the spinal fluid area & then get some blood from my arm & put that into the area.  It would hopefully clot over the hole & fix my problem.  As you can imagine I was very hesitant to go through with this & definitely didn't want to make the decision without Jon.  Geordie was amazing during this time, very supportive and helpful.  Saturday came & went, still feeling no better (although it was great to have my friend & also bridesmaid --Vanessa Hughey -- make a surprise visit to see me!) in fact I was feeling very anxious and worried and really needed some spiritual breakthrough & prayer.  Geordie stayed on into Saturday night (even though she wasn't really allowed to) and we prayed & cried and committed all to God.  It had been really hard to enjoy Gabriella and being a new Mum with all that had been & was continuing to happen.
Sunday morning arrived & so did Jon -- after talking with the anesthetist again we decided to go with this procedure (asking for the most experienced anesthetist & loads of other questions).  At 10:30 they wheeled me back down to theatre -- me praying all the way!  The anesthetist was an older German man who immediately put my mind at ease & they did the procedure quickly with no hiccups.  All the time I was praying & bearing the pain (I had to sit up for the procedure!) -- the nurse commented on how well I did (she was the same nurse who held me down for the first epidural!) and I said I was praying the whole time.
As they lay me down to recover the headache was still there (in fact it was worse lying down -- the opposite to what it had been) but i could feel it gradually wearing off.  By the time they had wheeled me back to the ward I was feeling heaps better all though I still wasn't sure about it.  Gradually over the next 1-2 hours I started to feel that it was clearing & I attempted a shower successfully.  We then asked to be discharged  and by about 3pm that day I was so happy to be driving out of the hospital with our new baby in the car on our way back home.  Burger King was a nice thought after the yucky hospital food, but even that wasn't very nice. It was such a relief to get back home -- nothing felt better.  And although it took a good 2 weeks or so to feel kind of back to normal the worst was over.  The C Section scar healed very quickly, what took the longest to heal was the feeling in my hips & top of my thighs -- it took a very long time for that to return.
Never again an epidural & never again an induction!
In spite it all though -- thankyou Lord for my health & my healthy baby :-) 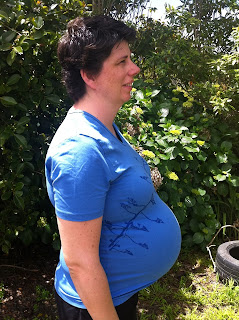 Well we left Kaitaia on Monday about 2:30pm, with the house clean & tidy.  Once we got to Whangarei we killed a bit of time shopping, walking in the park & having 'the last supper.' I chose to go to a Italian restaurant & enjoyed pizza, wedges & salad.  Little did I know it was going to be the best meal I had in a week!
We arrived at the hospital & was admitted to a room where I was hooked up to a monitor to see how baby was doing & to monitor my contractions.  After an hour of this they decided everything was ok, so inserted the first lot of a hormone gel into me to start the whole induction process.
We both then got ourselves sorted for a goodnights sleep (only interrupted by some screaming by another lady at some stage in the morning!).
9am the next morn they examined me again & told me I had dilated about 1-2cm.  They thought about trying to break my waters then, but decided instead on another lot of the hormone gel.  After that application I thought I would go have a shower, but it prompted contractions to start & with only a few minutes between each one, the shower idea went out the window.  About 10ish my waters  did break a little bit & the contractions started to get stronger.  By about 12:00 they were strong enough for me to be given the gas -- which became my friend for the next 18 hours!  This was all ok until about 3:30 when I had dilated enough for the midwife to break my waters.  Pretty much straight after that, the contractions got stronger & more intense & the discussion turned to more pain relief.  The gas & also pethadene with the strength of the contractions was not going to get me through to the end of the delivery.  So we opted (rather quickly) for the epidural option.  We were moved into a delivery room & a doctor was asked to put a IV drip in.  With small veins & me moving around a lot, this seemed to take awhile & so when the anesthetist arrived in the room it hadn't been done.  She seemed a little annoyed at this & after 2-3 attempts of getting in the epidural & it wasn't working she kinda snapped at me.  With the 4th attempt, the nurses holding me down & me chomping down on the gas she got the epidural in.  We then settled down with the pain under control & they decided to put another hormone into my drip line to increase the  contractions & carry on with the induction procedure.
** Please note -- the details from this point on are blurry for me & I have relied on Jay for a lot of what actually happened!
All was well for a few hours -- until I started to feel the contractions again (which were very strong & intense due to the hormones they were giving me) and back came the gas.  The anesthetist was called & she gave me some stronger drugs, and whole lot of other stuff, which seemed to work.  Again we had relief for about an hour & then again it began to wear off & the gas came back.  By this stage it was about midnight & I think I had dilated to the point of about 4cm.  At some point they gave me some other drugs (which made me say weird things) which helped a little, but basically through the rest of the night the contractions came thick & fast & the gas plus holding onto Jay's arm on one side & a midwife on the other side was what helped me get through.  I did dilate to about 8-9cm and through out the night we kept hoping that things would progress.  I kept asking how long things would be & dealing with contractions as best I could. 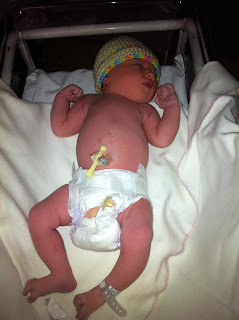 By 5:30am and things going nowhere plus me in a lot of pain with no energy left, the decision was made to go for a C-section.  Out came all the drugs & other things & I was wheeled down to theater   Once there they attempted 3 times to get a spinal block in but to no avail so they elected to go for a general anesthetic   Because of this decision Jay was unable to come in & be there while they operated.  Of course from this point on I remember nothing except waking up in recovery & feeling very sore & out of it.  In the meantime they had delivered a beautifully, healthy baby girl at 6:33am who Jay had been looking after her & waiting for me. 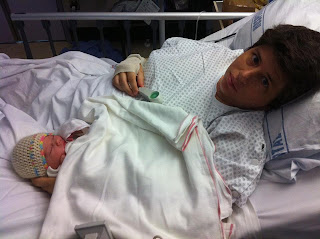 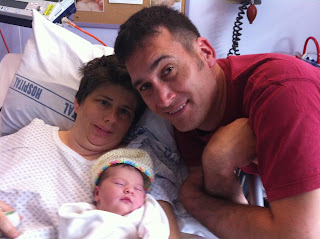 I came to about 8am & once I was all drugged up the trip back up to the ward was excruciating as I couldn't wait to see my baby & be back with Jay.