I have been blogging lately about food, weight, faith, environmental issues & social justice.  Because of the plethora of documentaries, links and other information, I have started another blog called Everyday Faith dedicated to the issues, resolutions, and links toward a more authentic lifestyle.  The question I am asking myself is...Is my faith a core part of my life or an appendage?
Check it out for more info or RSS to keep up with my journey...www.everdayfaith.blogspot.com 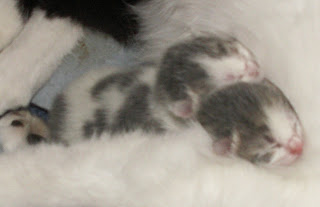 Although we are still waiting to say those words in a very real sense about our family...yesterday our cat Dumpy had 2 little kittens.  They are very cute, small and I think good-looking.  With the help of one of my students we have named them Hank & Felix.  Dumpy is coping well as a Mum considering she is not much more than a kitten herself!  And I was very relieved she had them in the prepared box, as opposed to behind the couch or some other strange place! Before we leave in September we are wanting to give both the kittens & Dumpy to good home(s). 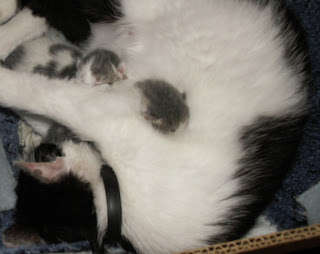 I love to cook and I love to have people over for dinner.  Food is a huge part of culture & community.  It seems that in the past few months I have been reading, watching and thinking a lot about food & our bodies.  Here are some of the things that have really got me thinking. Click on the links-- its food for thought!
Reading...

You are Fat
Health
3 posts by Tall Skinny Kiwi (1 for each part of his name)
Watching...
Jamie Olivers Food Revolution & his TED speech
Food Inc (great documentary)
Thoughts...
Series of Choices (my personal health)
The vulnerable are unfortunately always exploited and abused.  You will have heard of emotional, sexual & physical abuse, but what about food abuse??
From Oliver Twist' tasteless and insufficient tale of food, and now today's fatty, processed rubbish, children and adults are not getting a fair chance.
Today's problem is mainly through a lack of education. Knowledge is power, and ignorance keeps people in the dark & under control.
I want to be a part of the food revolution.
I want to get myself & family eating healthily, and exercising regularly.
I want to grow or buy seasonal fresh fruit & vegetables, and produce our own meat.
I want to help educate my community so they have the choice to do the same.

Been thinking a bit lately about my faith and how I want it to be an integral part of my life, not just an appendage.  This not only affects my buying habits, my eating & exercise habits, but what about church...
I came across this video today

Funny? Or true..especially for those who attend church, or who are caught up in this routine & ritual and have to feed the beast every week.  Don't get me wrong, I do enjoy a good/professional service that has been put together.  We just attended Passion Conference in Kiev on Monday which was great.  But I think it was great BECAUSE it doesn't happen every week. It is a BIG event that we look forward to.  It would be nice if it was about 3-4 times a year.  But when we try to reproduce that kind of thing every week we are quickly heading for burn out, and not only that but we lose the opportunity for relationship and community.  The old adage that "People don't care what you know until they know that you care," I think is very true here.  I want my faith to be outworked in relationships, people and community, and social justice, not meetings, events & entertainment. (Check out this for an example)  This I think is the faith that stacks up with what God requires of us.
PS: Check out Creative Worship Tour's take on this video

For all those people who keep saying that they want to visit, here is your reason, invitation & welcome...

I have started reading a book called "Everyday Justice

"  which has sparked off for me a fire that was already getting ready to burn.  I have been thinking a lot lately about my faith.  And that I want my faith to be the core of my being & life not an appendage that is added on and useful sometimes. This book really addresses this issue in regards to our shopping and other lifestyle decsions.  It talks about the impact our decisions have around the globe.  It is easy to read and I thoroughly recommend it if you are serious about your faith affecting all the decisions in your life.
In addition to this I have really been challenged about how I care for and look after my body.  One of my pet hates all my life is people who pick holes in the obvious mistakes or sins, but either ignore or cover up the not so obvious (but just as sinister, if not more) faults or sins.  Take for instance smoking and obesity.  Very often you will hear people espousing their views on how bad smoking is, and that it is a vice, yet on the other hand overlook the just as drastic health problem of over-eating, gluttony and obesity.  I used to be of the belief that 'oh well I have one life, one body, may as well make the most of it, use and abuse and enjoy, it will return to dust.'  Just lately I have come to realize that if my faith is at the core of my being, then lifestyle choices such as healthy food and exercise decisions should also be governed by my beliefs.  I need to demonstrate self-control and care for my body.  It is the temple of the Holy Spirit and should be maintained. Check out these posts (1) (2) by "tall skinny kiwi" that have challenged me.

I am overweight (never used to be a problem until I got married!) and so I am taking steps to be more active in my lifestyle choices and also control the intake & choice of food.  And with the help of MyFitnessPal (online & on my Iphone) I am keeping my intake lower than my output.  My goal is to lose 7-10kgs, and I already can't find 2.5kgs. :-)
Life is a series of choices, and I want mine to add up to "Well done good & faithful servant." 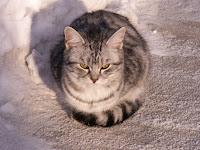 Yesterday Rocky didn't come for breakfast.  I checked to see he wasn't locked in the garage...  I wondered about him all day.  Later in the afternoon Jon got a call from our neighbour that he found Rocky dead in his garden.  Jon went to pick him and we gave him a burial.  I have no idea really what it was that killed him, maybe some poison, maybe he got sick?  No matter he leaves us to rest in cat heaven. 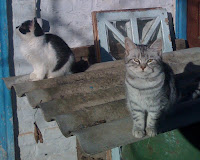 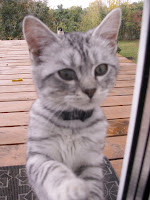 We will miss him a lot because he was a cat like no other.  Everybody who met Rocky loved him, even people who don't normally like cats.  He loved cuddles, and would always come & sit with you and purr.  He was also a very funny cat.  These are the great memories we will be left with...
* Sitting outside the toilet door waiting for you
* Chasing the cricket ball while we were playing
* Running, jumping and chasing Dumpy through the house (Dumpy is also missing him!) 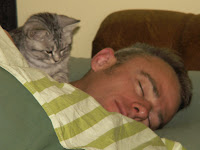 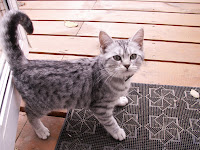 * Jumping about a meter in the air to see in the window -- like he was on a pogo stick
* Following me all the way to Jono's house, and then me having to walk him back again
* Running around in circles about 3-4 times when he knew he was about to get fed
* Trying to walk through snow that was as deep as he was tall!
* Pulling the magnetic letters off the fridge and playing with them like they were mice
* Hugging the radiators
* Trying to get as close to your face as possible
* Whenever we came home he would come running to meet us. 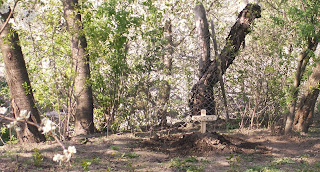